Hope everyone’s doing well. This is my 3rd consecutive post in my series for educating the RLY community about the main components of RLY.

As SuperLayer develops, I aim to continuously update this post for the benefit of all.

Thanks so much for your comments @KevinChou on the last post about Unite.io. Cleared up my questions very well! Credit also goes to @KevinChou for the pictures used regarding the budget and concept diagram.

SuperLayer Labs is a venture studio aimed at supporting the launch of new tokenized consumer products leveraging the $RLY protocol and network. It is building a community creating transformative web3 experiences that democratize opportunity and ownership of the internet.

As SuperLayer is a studio, this means it hires new staff with backgrounds in engineering, product, and legal/finance to build new products on $RLY. The new products are entirely new ideas for creating social tokens and games that do not necessarily have anything to do with creators. The $RLY technology is now becoming more robust and can support other social use cases besides creators and fan communities, and SuperLayer is going to take the lead to build some of these new products. SuperLayer hopes to inspire others to build wholly new products on $RLY, and the DAO can help fund others who have promising ideas and teams. Further, other projects in Superlayer will be using the $RLY token, creating a positive feedback loop within the RLY Network and increasing the value of the token.

The RLY Association has taken the protocol the managing team built on Forte, rebuilt several pieces to put the smart contracts on Layer 1 (L1) directly, and SuperLayer’s first product will be released on top of this technology. 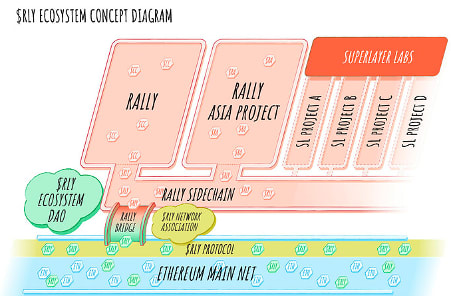 On August 18, Kevin Chou, Managing Partner, put forward a proposal which was voted on, on August 25th, as seen below. 100% of votes from community members voted to split the ecosystem five-fold – into a decentralized autonomous organization (DAO), a venture studio, a nonprofit, an affiliate and a corporation. 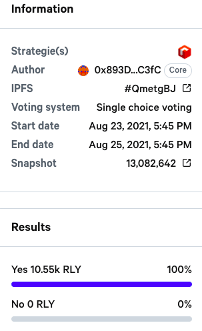 @KevinChou KevinChou, Managing Partner, is a serial founder and has launched multiple start-ups in the gaming and crypto space, including three with valuations estimated at >$1B (Rally, Forte and Kabam). Kevin will partner with developers to build new applications and venture-fundable businesses leveraging the $RLY protocol.

Mahesh Vellanki, also Managing Partner of SuperLayer Labs, has previously served as Co-Founder and Head of Growth for Rally, as well as co-founding Forte and was VC at Redpoint Ventures leading investments in the consumer internet space.

Prior to General Council of SUperLayer, @ira was General Council of Rally, leading the legal operations for the Rally Network. Ira was also part of Forte, as a strategic legal advisor most recently, but also as a General Council. As well as being General Council for HouseCanary and Kabam. And, a Board Member for Video Game Bar Association and previously held positions at large firms such as Sony, Williams-Sonoma, Wilson Sonsini Goodrich & Rosati and Cleary Gottlieb Steen & Hamilton LLP.

SuperLayer Labs incubates projects alongside founding management teams. The venture studio will be structured to enable the aggregation of capital from multiple sources, with a focus on both strategic and financial investors. For example, Marc Andreessen and Chris Dixon, both general partners at longtime Rally backer Andreessen Horowitz (a16z), are among the investors in SuperLayer Labs, the new startup accelerator seeding independent consumer Web 3 projects that utilize Rally’s RLY token.

The $RLY community will receive a return on the capital that it invests through the community treasury as outlined in the budget below.

The $RLY community will have the opportunity to participate in up to 25M $USDC in new venture investments that SuperLayer leads. These investments will be in projects and companies that will build on the Rally ecosystem focused on network and community growth initiatives.

Additionally, the $RLY community will have the opportunity to provide a 20M $USDC credit facility to SuperLayer at a five percent (5%) annual interest rate payable annually with a loan term of thirty-six (36) months from the date of tranche draw. The credit facility will be drawn in tranches of 5M $USDC with the first tranche released to SuperLayer within five (5) days from the date of approval of the proposal. Each subsequent tranche will be released upon request by SuperLayer. The request will be made to the Community Treasury Manager and will be payable within five (5) days of receipt. 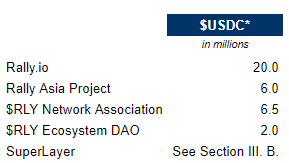 SuperLayer Labs will utilize a General Partner/Limited Partner structure that will enable the aggregation of capital from multiple sources that are interested in becoming a part of the future growth of the $RLY protocol.

Thank you for your continued efforts to educate the community on Superlayer!

Thanks for the great writeup! Very excited by this project.

Can you clarify what you mean by this statement?

Is this referring to the Rally DAO as a single entity or will individual Rally members have the opportunity to invest?

Exciting to see the progress being made. Thanks for all you do!