The YDVs were the first feature Rally launched to Ethereum mainnet and have been an important part of early plans to distribute $RLY to supportive community members and start building a community treasury that could fund ongoing growth and development of the Rally Network. The core motivations for YDVs were:

I think they’ve largely performed as expected to date but the risk profile seems to be changing. We chose Yearn vaults for the yield delegation and $RLY distribution strategy because of the quality of their engineering team, the stability of their protocol, and our understanding of the level of risk associated with their yield generating strategies. As Yearn builds forward on their vaults and starts migrating to their v2 design, this risk profile starts to change substantially. The Yearn v2 design allows for more rapid iteration on strategies, dynamic rebalancing within a single vault in order to support multiple strategies simultaneously, and a general move towards capital efficiency and leverage possibilities. All of these are fantastic ideas and should continue to position Yearn as a leader in the DeFi space. However, they all also increase the risk profile of Yearn vaults in a way that makes them less compatible with the motivations behind the introduction of YDVs. And this is all exacerbated by the fact that one of the seemingly minor modifications supporting the v2 transition (temporarily dropping withdrawal fees from v1 vaults) opened the door to an exploit of one of Yearn’s v1 vaults.

Perhaps most importantly, we no longer need to continue funding the treasury through YDVs as we conclude the first part of the Rally community fundraise. Community Treasury Fundraise Update… and Next Steps

With all of the above in mind, I’d like to start a discussion around retiring YDVs and reallocating the remainder of the $RLY previously reserved for YDVs to other distribution possibilities that support creators and Ethereum community members. I don’t have a formal proposal in mind at this time; but I’m thinking that an outcome of this thread, if others feel the same way I do about YDVs, would be a subsequent proposal specifying how we’d like to reallocate the $RLY currently associated with YDVs.

One other related topic would be what to do about the current Liquidity Mining rewards for the Curve 3pool YDV. Currently, that stands as 13% of LM rewards, and is the 6th LM pool. I’d think we reallocate these token rewards to the Uniswap RLY/ETH pool, as we consistently overindex on Uniswap volume relative to its 35% rewards allocation. Here’s stats from the week of February 2 to February 8. 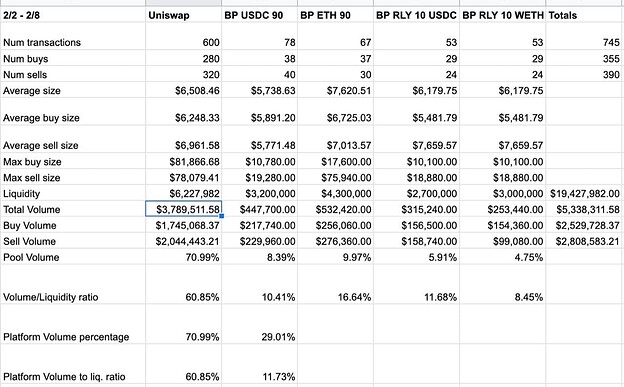 I propose we take this in 3 bite-sized steps:

Also, regarding the DAI exploit… Thoughts on a proposal to reimburse anyone who lost DAI? I believe DFS said the amount lost was around 20k. I think it’s the right thing to do here, and the timing is good since we’re reducing the risk from YDV’s as a whole.

rding the DAI exploit… Thoughts on a proposal to reimburse anyone who lost DAI? I believe DFS said the amount lost was around 20k. I think it’s the right thing to do here, and the timing is good since we’re reducing the risk from YDV’s

I agree we should be open to reimbursing lost DAI, but have only heard of the one user (I can’t find him/her in Discord now that I look). If we can get Etherscan links and see clear proof, I’m supportive

I’m thinking of starting to move 1) and 2) together into a snapshot for the community to govern. The proposal I’ll put up would be:

If anyone has comments, please weigh in! If there isn’t any commentary, I’ll spin up a snapshot proposal in the day or two ahead. Or happy to debate and wait longer if there are issues raised here.

Also, if anyone has lost funds in the DAI YFI exploit, please DM me or Phelps or DFS with the proof. Given the amount, we should reimburse from the community treasury. I don’t think we need a vote on this, but happy to do so if anyone feels strongly. From a potential risk amount standpoint, the total make-good I believe is roughly 30% of the $20K that was in that YDV, or roughly $6K at risk from community treasury.

I agree with putting these two proposals into a single snapshot vote and look forward to separate discussion around reallocating YDV rewards. Perhaps Delphi could take the lead in facilitating this discussion sometime in March?

I had participated in the YDV at a reasonably small size but was excited about the project and wanted to be an early supporter. Totally on board with retiring the vaults if Rally has the capital it needs at this point. The one question I have is on the mechanics/timing, I’ve looked at pulling my funds from the vault a few times over the past week and current gas fees make it pretty painful. Will there be a timeframe by which YDV participants would need to withdraw/those vaults get permanently shut down?

On reallocating YDV rewards, has any thought been given to finding a way to allocate that RLY to active participants in snapshot proposals on new creator coins? I think that creates good alignment on allocating tokens to community members who are making decisions that will impact the long-term success of the platform, and increases early engagement on learning about potential future creators on Rally.

Thanks for being an early participant!

Mechanics and timing - if the snapshot proposal to retire YDV passes, we’ll simply stop the Rewards flow in the smart contract. You keep earning yields as you would with a standard yearn deposit; they just won’t be harvested or transferred to the treasury in exchange for RLY.

The smart contract for YDVs will continue to live on forever on Ethereum, and you can withdraw your funds whenever convenient (and gas is cheaper) and still have the benefit of compounding your principal.

tldr - you keep earning, and can withdraw whenever convenient