First, I wanted to mention that I am extremely appreciative of the opportunity to work with the Rally project community. It has been such a joy to help creators and their communities see the benefits of social tokens / creator coins and to drive real enduring value within their communities. It has been fantastic to meet with many of you and to also hear your feedback and advice on how to grow Rally’s awareness within the creator, fan and crypto communities.

As I mentioned when I joined the project, the time is NOW for the Rally community to invest heavily in go-to-market.

To close out the quarter, I would like to highlight all of the progress made since I joined the project in late February. As you recall, I was appointed by the community to build out Rally’s go-to-market strategies and focus on the successful execution of these strategies by managing and allocating funds from the Community Treasury pursuant to the requested budget approved through Snapshot, and also engaged to advise and work with key members of the community and the Rally development team to effectuate the strategies designed to push Rally to the next level. I will also outline the spend across the various work streams.

I will be presenting the below accomplishments and spend at the 7/23 community call.

At a high-level, this past quarter was spent building the foundation for go-to-market. I advised the Rally project to expand the core team across Creator Partnerships and Creator Success and also helped the team stand up a number of key content, community and educational work streams. I engaged a top-tier marketing agency (ACE Content / Anomaly) to work with the community on many of the foundational marketing work streams including brand foundation, re-launching the marketing site, defining the target creator profile and developing the overall comms strategy. You will have seen their work in a number of community meetings and will soon see their work on the updated website. Additionally, I engaged UTA Marketing as a strategic partner to represent Rally to the creator / talent ecosystem. More to come on this front with a public announcement in the August timeframe.

The current statuses of the GTM workstreams are spelled out below:

The below outlines the various different buckets of spend, the proposed budget and the actual spends to date: 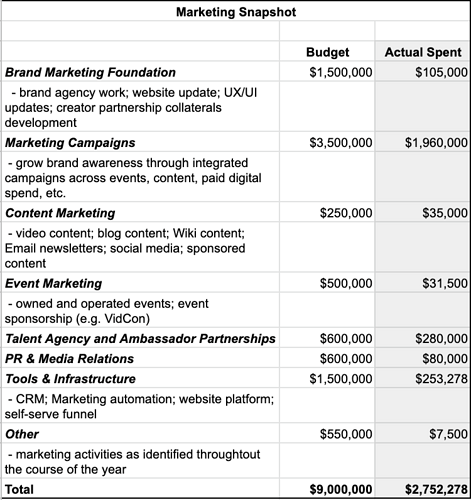 Thanks @BremnerMorris for the update, the level of details you provide are really helpful, and it is exciting to see the advancements you’ve made (I myself am really looking forward to the new website to re-launch).

I think the 4 tiers you mentioned are a great way to think about the go2mareket strategy (you should coin this segmentation in the creator economy imo. It’s super helpful to analyze the different creators according to these buckets).

Would be great if you can shed some light on the efforts of onboarding creators and where do you see friction. For me, it seems like Rally is currently in a sweet spot for ‘established’ creators (using your category) but still hasn’t cracked the Trailblazers and Icons. It seems like in the latter categories there is heavier competition from platforms like Bitclout or even to build it yourself if you are a big enough creator already.

What can the community do the improve the efforts of onboarding Trailblazers and Icons? Any help you can use? What do you think needs to happen for them to decide to go with Rally?

Thanks for the kind note and the positive feedback! We’re just getting started but glad to see the progress so far.

Re: Friction in onboarding - main points of challenge are creators identifying scalable use-cases for their coin and also a perceived reputational risk of being the first icon or trailblazer to launch their coin. The Rally team is currently working with the dev community and within the product org to identify repeatable use-cases that resonate with the icon and trailblazer creators. On the reputational risk, we’ve been working with the team at ACE to develop co-marketing packages to help land the message of the launch of creator coins to help smooth the communications to fans. It’s also important to note that these conversations with icon and trailblazer creators are essentially “enterprise sales” which typically take at least 6 months to close so we have only been “in market” with these folks for ~3 months and we’re in the process of significant education in q2. Finally, while the NFT craze was a great eye-opener for creators on the value of crypto within the creative economy, it also distracted creators towards NFT auction opportunities;

Re: Competitive dynamics - we haven’t been seeing much friction from either bitclout or building it themselves… it seems that if a creator is going to launch a social token, they see Rally as the market leader and have significant trust in the tech and the team. It’s more a question of whether they want to launch a social token and on what timeline;

Re: Help from the community: continue pushing forward the value prop of social tokens, the more noise and positive momentum, the better. Also, continued progress within the developer community and encouraging / sponsoring scalable use-cases for the coins;

Thanks for the encouragement!

Thanks for the questions!

Thanks for the detailed answer!

@BremnerMorris, thanks for your answer!

I can understand that Icon deals are extremely complex, legal/tax/commercial etc. As they are that important for Rally I personally hoped they launched a bit faster…
To gain momentum faster, would the following be an option? Split the communication moment of onboarding an Icon in 2? So once you have commitment from the Icon, create major press event asap. After that the actual launch can be 1/2 months later.

Also here I can imagine an anouncement message with Icon creator can be complex as soon as possible after commitment. Can they be convinced as I think it is also in their best interest to create as much buzz/hype/stories/desire about them launching a coin as possible.

@martinmartin - definitely something to look in to when negotiating with the creators. Agreed that the momentum of these launches and even the marketing announcement are great validation markers for the project.